The Honor Guard is an ancillary unit within the Davie Police Department that is comprised of a select group of officers and detectives. The members are chosen to serve on the Honor Guard and their standards of conduct and level of professionalism must be above reproach.

In addition to their regular police-related duties, the members of the Honor Guard, having a deep devotion to duty and a strong sense of dedication, gather when called upon to perform at various venues. The Honor Guard has marched in parades and presented “The Colors” at many different events. They also execute joint ceremonies throughout Broward County as part of the Broward County Multi-Agency Honor Guard.

It is perhaps the greatest honor for members of the Honor Guard to display their appreciation for the ultimate sacrifice made by dedicated men and women who die in the line of duty. They honor these individuals through their professionalism and ceremonial displays, such as guarding the casket and the “folding of the flag.” The Honor Guard members also represent the Davie Police Department at various memorial services and other special events to honor those they have lost and to recognize their families, friends, and coworkers. 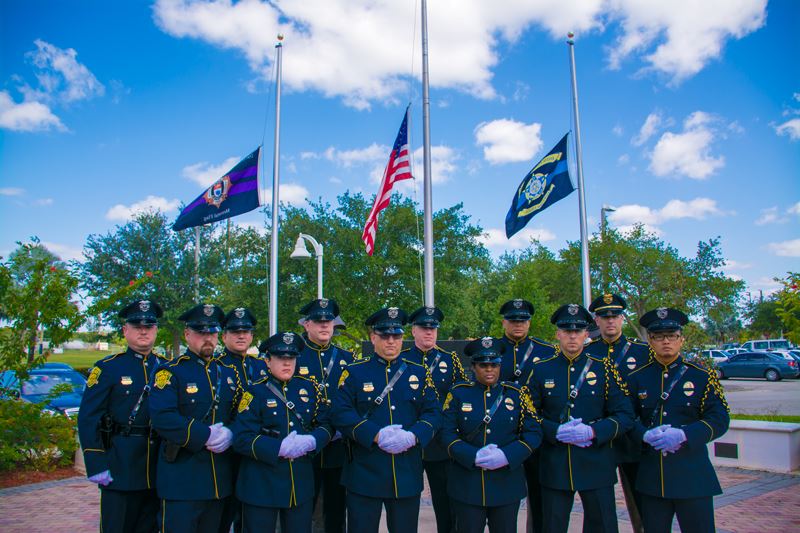 The Honor Guard is led by the Honor Guard Commander (Lieutenant), with two Team Leaders, and 14 members divided into two squads. Each member of the team receives 40 hours of training at the Broward County Honor Guard Academy in areas such as Drill and Command, Uniform and Appearance, Flag Folding, and the 3 Round Volley. The Honor Guard trains together on a quarterly basis.

The Davie Police Department’s Honor Guard is dedicated to serving the citizens of Davie, and honoring the traditions, memories, and patriotism of the people in the community.