Essentially an economic development program, the function of the Agency is to preserve and enhance the tax base, to alleviate conditions of slum and blight, to facilitate affordable housing, and to stimulate private sector participation within the redevelopment area. This Agency’s Board meets on the first Wednesday of each month at 6 p.m.

Creation of the Agency

The Davie CRA was established in 1988 by the Florida Legislature. The Town of Davie Ordinance No. 88-23 (PDF) approved on the first reading on April 20, 1988, and on the second reading on May 4th, 1988 created the Community Redevelopment Agency pursuant to the Community Redevelopment Act of 1969, F.S., Chapter 163, Part III. The CRA is also considered a special district under Florida Statute Chapter 189. The redevelopment area approved was 347 acres. The charter has been amended several times. Resolution No. R-94-287 (PDF) was adopted on September 21, 1994, which amended the area served by the CRA by adding 737 acres for a total of 1,084 acres. The charter was amended by Resolution R-97-434 (PDF) adopted on December 17, 1997, which added 20 acres to the redevelopment area making the current limits of the CRA to 1,104 acres. Lastly, the charter of the CRA was amended by Ordinance No. 2012-11 (PDF) adopted on August 1, 2012. This ordinance provides for the Town Council to act as the Board of Commissioners of the CRA rather than the appointed board which had previously served.

The various services and programs of the CRA are fully described in the Town of Davie CRA Redevelopment Plan (PDF).

View the Boundaries of the CRA Service Area (PDF).

The Davie CRA has adopted the Broward County Code of Ethics (PDF) and adheres to Florida Statute Chapter 112 Part 3.

The Community Redevelopment Agency (CRA) Board meets on the first Wednesday of each month at 6 p.m. in the Town Hall Council Chambers, 6591 Orange Drive, Davie, FL, 33314. 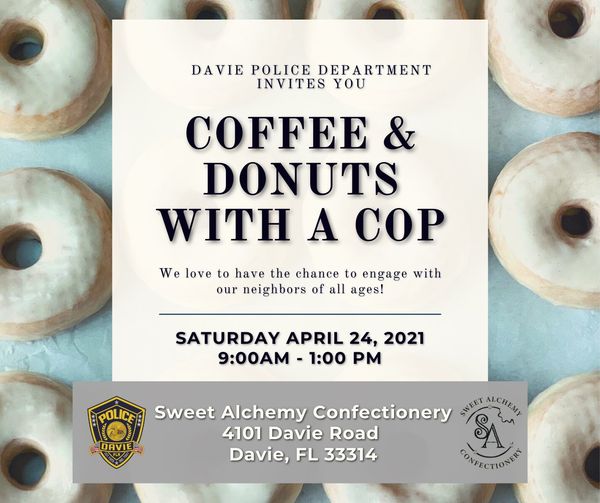 Coffee & Donuts with a Cop